The complexity and uniqueness of wayang beber has enabled it to resist time, even in completely different circumstances and displaced contexts. Various of its aspects have captured the imagination of local people, particularly artists. Storytellers were drawn to the story and the strength of Panji as a romantic wanderer and seeker of love and goodness; performers were fascinated by the performing potential of combining painting, music, acting and visual art; the painters were drawn to the meticulous details and painting technique; and craftspeople to the refine and skilfully fashioned thin paper. Due to these characteristics, various contemporary versions and interpretations of wayang beber are keeping the tradition alive – both its material and intangible aspects. 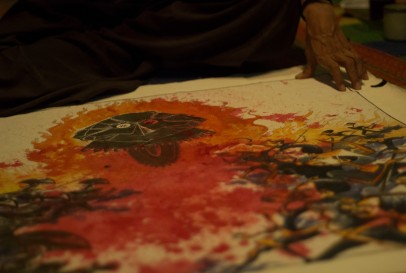 Detail of a scroll made by the group Wayang beber Metropolitan. (2016)

Apart from the “original“ scrolls and efforts of the scroll-owners to physically preserve it, the material aspects are preserved through the recreation of the beaten-bark paper and copies of the scroll paintings. Some craftspeople that are creating handmade paper are finding the beaten bark paper of the scrolls an example of utmost quality they strive for, using traditional and modern tools and knowledge.

Certain painters are particularly devoted to researching the traditional wayang beber scrolls and creating their copies. They are motivated by the desire to create scrolls for performances (making the fragile “original“ scrolls more durable) and for museum displays, to protect and pass on the knowledge and skills to younger generations, to promote a unique art to local and wider audience and/or to create artwork appealing to specific collectors. Painters recreate the entire scrolls and, more commonly, certain scenes from the two traditional sets of Pacitan and Wonosari, incorporating their own style and colour palette. 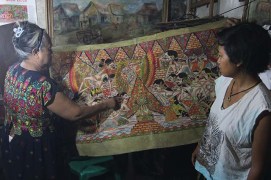 One scene from the Wayang beber Pacitan set by HERMIN ISTIARININGSIH SUTRISNO at the Museum Topeng dan Wayang in Ubud (Ubud, Bali, 2016) 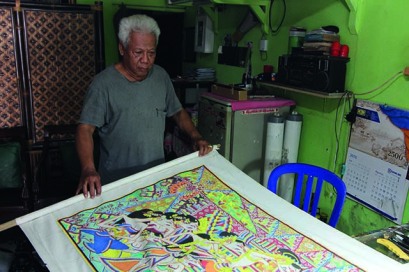 Painting inspired by the Pacitan set, by artist Faris Wibisono. It is a part of a cycle of 24 scenes depicting rural life and modern chalenges (2016)

Aside from painting scenes from the traditional scrolls, the painter and storyteller Faris Wibisono creates scrolls from his own cycle Wayang Beber Tani (tani is short for the Indonesian word pertanian, which means agriculture), through which he promotes the beauty of rural areas of Java. Along with painting and performing wayang beber, this young artist often organizes lectures and workshops for children, where he shares his knowledge about the wayang beber tradition and his ideas about the need for preservation of a rural way of life.

Some artists, besides creating copies of old scrolls, are creating their contemporary versions, where historical symbols are intertwined with the urban motifs from the 21st century. Their main source of inspiration is still in its main artistic aspects: dynamic decorative surfaces, meticulous details and the colour gradation technique sungging, as in the aspects of its content: the character of Panji as a symbol of the wanderer who does not give up on his romantic ideals.

The artistic qualities of Wayang beber Wonosari set especially attract the painters that are moving away from the traditional format: the less decorative surfaces enable a larger space for adjusting the contemporary topics to the form of a scroll. Instead of the dominant motif in a scene each scene usually incorporates several simultaneous events and the symbolic markers of the end and beginning of each scene, instead of mountains, become buildings, street signs or water hydrants. Also, artists adapt the Wonosari performing style: sitting in front of a scroll and pointing at the characters with a long wooden stick.

“Kota seribu satu mimpi” (A city of a thousand and one dreams), artists: Surahman and Samuel S. Adi Prasetyo, 2011

Some artists are gathering in collectives composed of painters, musicians, singers, puppeteers and dancers, who are joining efforts to create new versions of the picture scroll theatre. Along with the scrolls, they use various props such as puppets and masks made of waste, they incorporate video screenings and dance into the performance and they use modern instruments together with the traditional ones.

During our fieldwork on Java (2016-2018), three art collectives stood out as the most engaged on Java in organizing events that are reviving and promoting picture scroll theatre. Their performances are dynamic, they combine various art forms and reflect on modern day topics to which the younger generations can relate to as well. Through their performances wayang beber serves as a means for gathering different generations and jointly rethinking problems from their own environment, as well as a chance for learning about local history and traditional arts.

Wayang Beber Metropolitan is a group from Jakarta, which is shifting the old tradition important for gathering the local community to the Indonesian metropolis. Gathered in 2009, the members wanted to present to an urban audience an art form of which not many have heard about and which existed only in traces in rural areas of the East Java. Using Indonesian language, their performances are targeted to a wider audience and aim to raise the problems of big cities and give comments on contemporary Jakarta and the society in general. Along with political corruption, ecological and social problems, another big issue is the fast-paced city (metropolitan) lifestyle, which causes alienation and loss of contact with tradition and one’s ancestors. In some of their performances they combine scrolls, puppets, video projections and dance. The music which is used plays a major role in conveying all these messages and often uses melodies played on traditional Indonesian instruments combined with a contemporary sound.

Performance of Wayang beber Metropolitan at the National Museum during the Seminar dedicated to wayang beber. (Jakarta, 2018)

Wayang Beber Welingan is a group from Surakarta (Central Java), that has been active on the scene for a number of years. The group is recognisable for promoting the traditional ways of preparing and performing the shows, with a special focus on ecological problems. The term “weling“ stands for a “message“ in the Javanese language, therefore, the name of the group can be interpreted as wayang beber that wants to convey messages, inform and educate. The process of preparing their performances is carried out in accordance with nature and with the local Javanese tradition. Their scrolls are painted using the traditional technique of painting fabrics with wax and natural colours, known as batik. One scroll provides an endless source of stories and the language they use for narration and singing is Javanese. Their mesmerizing music is a combination of traditional and modern instruments and the songs have an important role in their performances. The performances of Wayang Beber Welingan are harmoniously linking the tradition and modernity: drawing out from tradition, they create new art forms and engaging workshops interesting to the audience and, at the same time, teach about this forgotten local tradition and stress out crucial social problems.

Wayang beber performance by Wayang beber Welingan during a workshop held in the International school. (Surakarta, 2016)

A workshop by Wayang beber Welingan held in the International school. (Surakarta, 2016)

The youngest of the collectives is Wayang Beber Sakbendino from Pacitan (East Java) which, from August 2016 until August 2017, has been performing contemporary wayang beber every day with an additional traditional style performance once a month. The name of the group could be translated from Javanese as an “everyday wayang beber”.  Their aim is spreading the awareness of a local tradition, forgotten even in this area of close proximity to the place of keeping of the Pacitan set.  The performances had different duration and were held on a different location each time: on the street, on the city square, on the beach, next to certain monuments, near the temples, in cultural centres, in schools, in street restaurants or in mosques. The music also varies in each performance; from collaborating with music groups to performances accompanied just by quiet singing. They use their own scrolls or scrolls made by Dani Iswardana, an artist from Surakarta focusing on the art of wayang beber. After completing the one year in August 2017, the group continued performing on special occasions in the Pacitan area and in nearby villages and cities. Although the founder of the group is also the main storyteller, he often encourages other group members and the audience to try and perform the story, engaging them directly in the revitalisation of wayang beber.

Wayang beber performance by Wayang Beber Sakbendino, close to the temples that have reliefs with characters from the Panji stories. (Mojokerto, 2016) 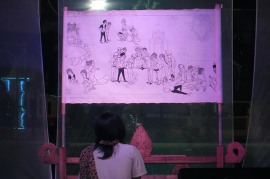 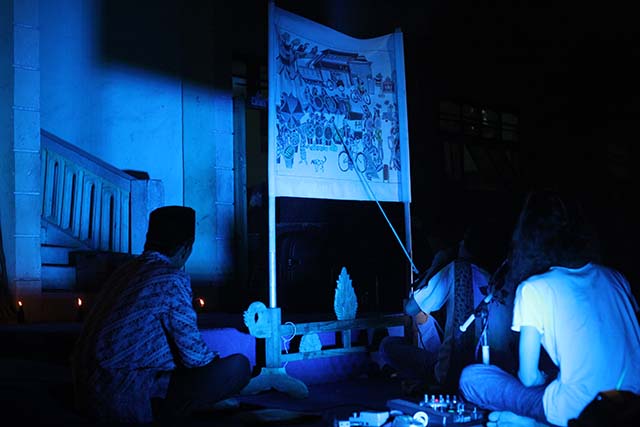 The future of WAYANG BEBER

Nowadays, contemporary art performances and several exhibition displays are the few places of informing and exchanging of knowledge and ideas about wayang beber. They present educational platforms for raising awareness of the local community about the need for preserving this valuable local tradition. Also, they point out the extraordinary activist potential of art in protection of cultural heritage. The aim of these activities is to inspire and include the local community, especially young people, in the joint revitalisation of Javanese picture scroll theatre, as well as in critical thinking and creative interventions in their environment. Besides that, they present a place for socializing between different generations and a place of fun for the local community. This helps in strengthening of the sense of community and collective Javanese identity which wayang beber fosters in all its historical phases.

Although wayang theatre is inscribed in the UNESCO’s Representative List of the Intangible Cultural Heritage of Humanity since 2008 which formally included wayang beber, in practice the picture scroll theatre is highly neglected, unlike other wayang theatre forms. National politics have focused on promoting the famous shadow puppet theatre, wayang kulit, and performances with leather puppets are ordered for almost every state holiday and important public event, as well as in the context of touristic promotion within the country and internationally. However, efforts of different groups of enthusiasts manage to spread their knowledge about the picture scroll theatre in their communities. They especially try to reach the children who will be the key factor in the continuous preservation of wayang beber and its translation into the language of the 21st century.

A young storyteller practising during a workshop held by Faris Wibisono. (Pracimantoro, 2016) 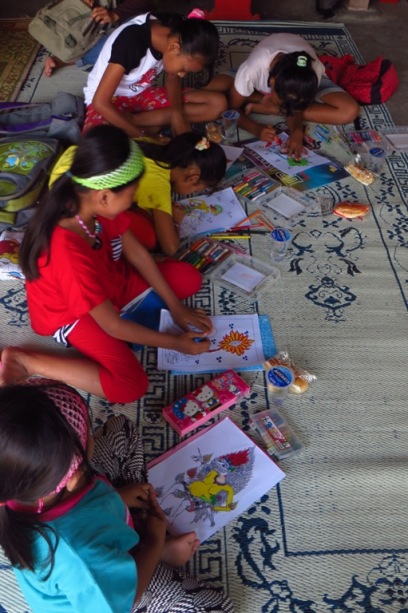 A process of making Wayang Beber in Bantul